This itinerary is based on documents from Paul Julien’s personal collection, which are currently in the care of the Nederlands Fotomuseum in Rotterdam. Over time it will become more detailed and intricately networked. [1]last updated 2021-05-23

July 22 Letter to parents from Cairo (Egypt). The letter was accompanied by negatives and emphasises how they should be cared for.

August 03 Letter to parents from Chartoum.

August 10 Letter to parents from Kaka. Mentions grasshopper cloud and the reluctance of “the Shilluk” to be photographed.

August 17 Letter to parents from Bor. Written just after filming grasshopper cloud. Mention of negatives & films that were already sent over to the Netherlands with instructions to rinse them “in case of signs of deterioration”.

August 18 Arrival in Juba, mentioned in letter to parents from Watsa (Congo).

1933-08-19 Malaka, unsigned copy of letter dated September 13 1933. Reply to a letter written by Julien Augustus 9th from Malakal, on the difficulty to get in touch with ‘Pygmies‘.

August 20 Letter to parents from Aba. Introduction to Chamunyonge is mentioned.

August 27 Letter to parents from Watsa.

September 08 Arebi, Receipt for sending express letter to the governor of Irumu district

September 11 Letter to parents from Watsa.

September 12 Letter to parents from Gombari.

September 28 Letter to parents from Irumu. With mention of the excavation of the Efe skeleton.

This itinerary is based on documents from Paul Julien’s personal collection, which are currently in the care of the Nederlands Fotomuseum in Rotterdam. Over time it will become more detailed and intricately networked. [1]last updated 2021-05-23

July 29 Letter to parents from ship ‘in front of Freetown’.

July 30 Letter to parents from Monrovia.

August 03 Letter to parents from Monrovia.

2013_Exhibition ‘Much Has Changed’ 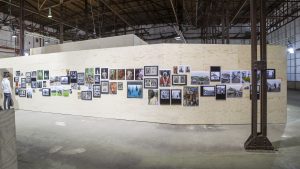 The first exhibition resulting from my engagement with the PJU collection was at the Noorderlicht Photofestival 2013 in Groningen (NL).[/efn_note] photograph by Marco Wiegers, kindly provided by Noorderlicht House of Photography[/efn_note] It was part of a group show presenting all the outcomes of the commissions themed “The Sequel” in which photographers responded to existing bodies of work.

The mosaic like wall was made up of prints of reproduced lantern slides, selected spreads from Campfires Along the Equator and Eternal Wilderness, as well as photographs produced by me in response to the first inquiries with photographs from the collection in Liberia, Nigeria, Uganda with Batwa communities.

In addition I was invited to be part of a series of video portraits that, awkwardly, was titled ‘Married to Africa’. It was partially shot at the exhibition:

In 2013 I participated as a facilitator in “Àsìkò, an innovative programme designed to redress the frequently outdated or non-existent artistic and curatorial curricula at tertiary institutions across Africa,”[1]from the text on the cover of Àsìkò: On the Future of Artistic and Curatorial Pedagogies in Africa, (2017 ), Bisi Silva (ed.), Lagos, CCA.  initiated in 2010 by curator Bisi Silva (1962-2019), founder and director of the Centre for Contemporary Art Lagos. This iteration of the programme took place in Ghana and was devoted to The Archive. When I was invited to contribute to the curriculum I had just started my investigation into the PJU collection and invited the participants to engage with the lantern slides in it, which I had digitised printed in Uganda.

In 2017 a book was published, devoted to the programme at large. I responded to the open call for contributions to the book with a reflection on my position, contribution and the responses to the pictures I brought. Find the full publication below. Pictures can be enlarged by clicking on them. Quoted here is the section of the text that is particularly relevant to this context.

“The call for Àsìkò 2013, with The Archive, Static, Embodied, Practiced as its theme, seemed to be written for me. Except that the call was directed at African artists and curators. And I guess that of all the things I am, and despite the time spent on the continent, African is not one of them. Then, in one of those unexpected turns that life tends to take, I was invited to be one of the facilitators for the programme. Someone supposed that I knew a thing or two about archives. I guess I did. But not much more.

I was embarking on a project about Dutch anthropologist, ethnographer, photographer, and explorer Paul Julien (1901-2001). I told the funders of the initial part of the project that I would try to add contexts and stories to images made by Julien in about 16 countries on the continent. I supposed that this would reveal other potential values of his photographs than what was known about them so far. Julien had a PhD in chemistry, and just like me, made a living as a teacher. Some of the girls he was teaching remember how all his other, self-taught identities infected his chemistry classes and resulted sometimes in his absence.
I brought about 1200 prints of digitised lantern slides to Accra. Julien probably used the black and white positive images, mounted between 10x10cm glass plates, when speaking about his experiences to (mainly) Dutch audiences in lectures. The slides were organised per country, region or tribe. Captions or other documentation on their use are not available.
Julien never set foot on the Gold Coast, but since Àsìkò aspired to be a pan-African programme, I thought it might be a useful exercise to discuss his images with the participants. I may have expected a critical attitude, heated discussions about the problems of othering I considered to be embedded in the photographs. I guess I hoped for recognitions of and identification with what the images showed. I do not recall that kind of response. The photographs were by the participants with great respect. They selected and played with the images using criteria connected to their formal qualities.
I now wonder whether the respect was connected to my position? Or to the context of the programme? Were the formal criteria used related to the way participants had been trained? Or was it the only way they could connected to what the images showed? I won’t be able to find out. It is not easy to ask the right questions at the right time.” 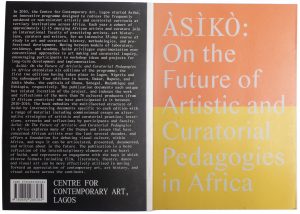 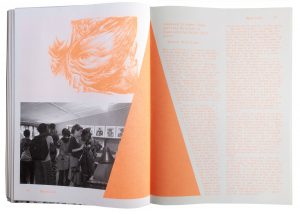 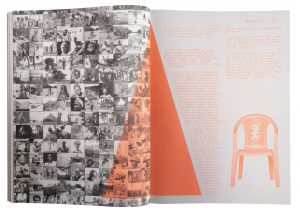